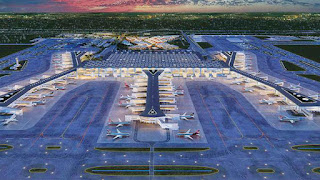 Sometimes we live stupid conditions. People asking us when they need to be at AirPort and they are telling us their pick up times.

The funny story starts right from there. They start to negotiate with us. However it is stupid discussion because they can get their own risk and they can chose time and that's service they are paying and buying so they are free to decide about time to.
If they like to have risk they of course can take. They don't need to negotiate. It is an example for time killing subject.

There are 2 Airports in Istanbul and one of them called Sabiha Gokcen and code is  Saw and another one is Istanbul Airport and called IST
We recommend to be depart from central hotels to any of them for international flights 5 hours before and for domestics 4hours before.

By the way one of guest from California said Airport is impressive. People in Turkey dissussing turn over the Hagia Sophia as mosque but they are moving Turkish super hero Ataturk name from AirPort who is one of good fighter against imperialism. It is one of Turkish dilemma.